Anticipation is building for the new Walt Disney World Gondolas air transportation system and I have all the info that we have about the gondolas so far! 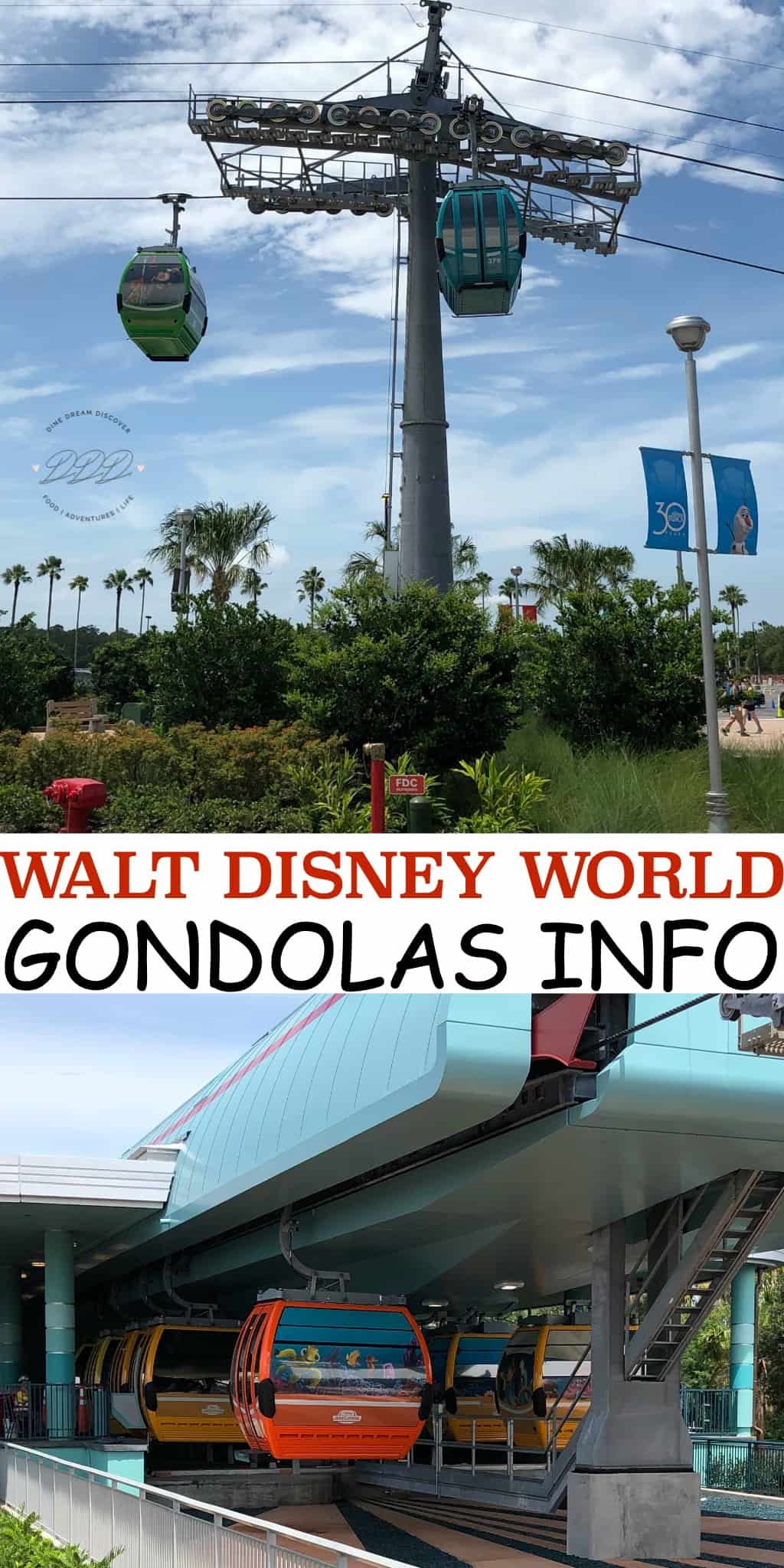 All About the Upcoming Walt Disney World Gondolas

Walt Disney World just keeps getting better! At the D23 Expo in 2017, Disney announced that a gondola system, called the Disney Skyliner, would soon debut. Well, the time is coming soon because the Skyliner is expected to open this fall! Anticipation is building for this new air transportation system and I have all the info that we have about the gondolas so far!

Start riding in our very own gondolas on September 29th, 2019! 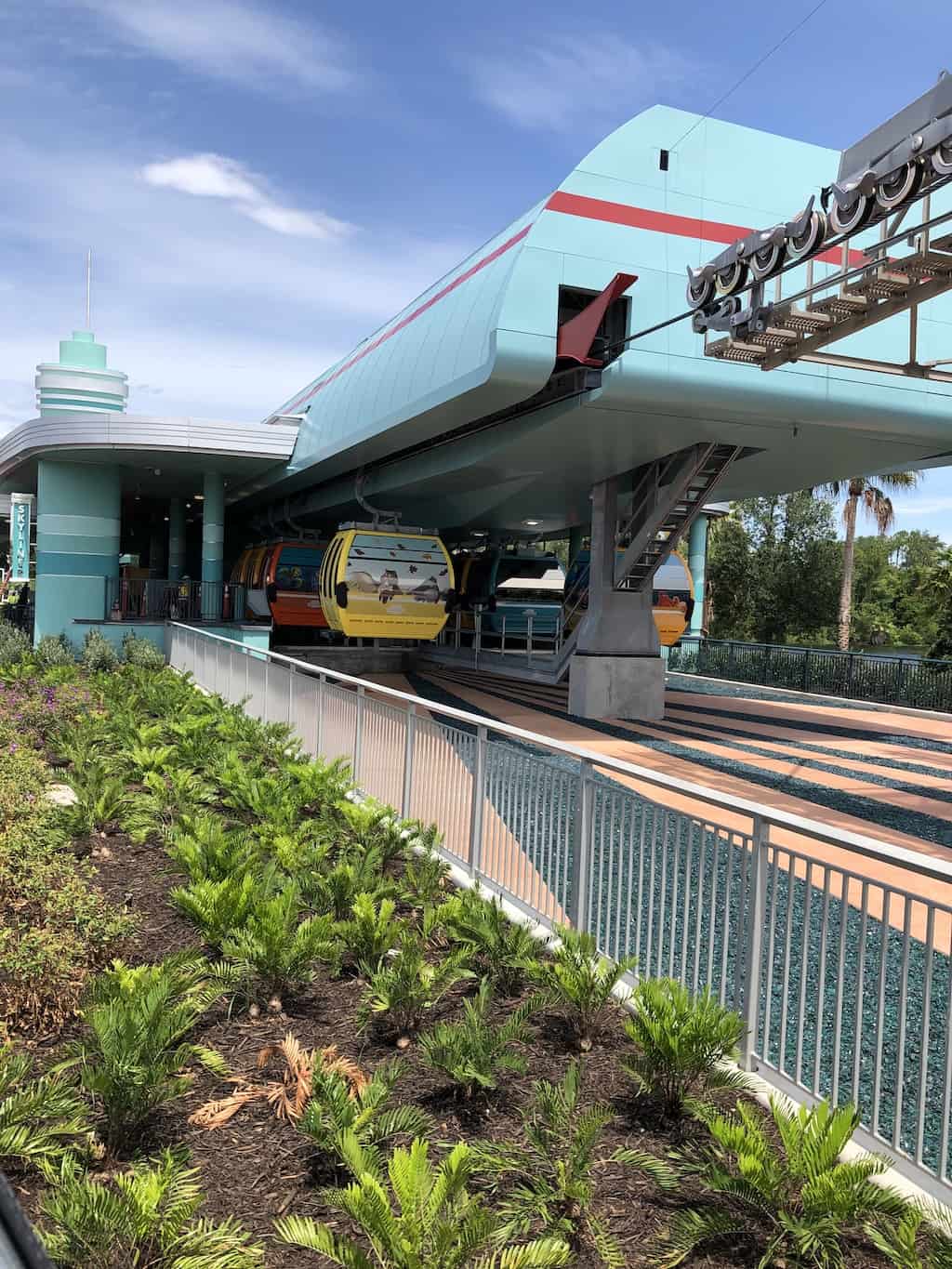 What is the Walt Disney World Gondolas

From the 1950s to 1999 Disney had a similar gondola system called the Skyway. The Skyway was located in the Magic Kingdom and connected Fantasyland and Tomorrowland. It was a nice way to give tired guests a brief respite, but it was slow moving. Disney has taken this idea and really ramped it up. 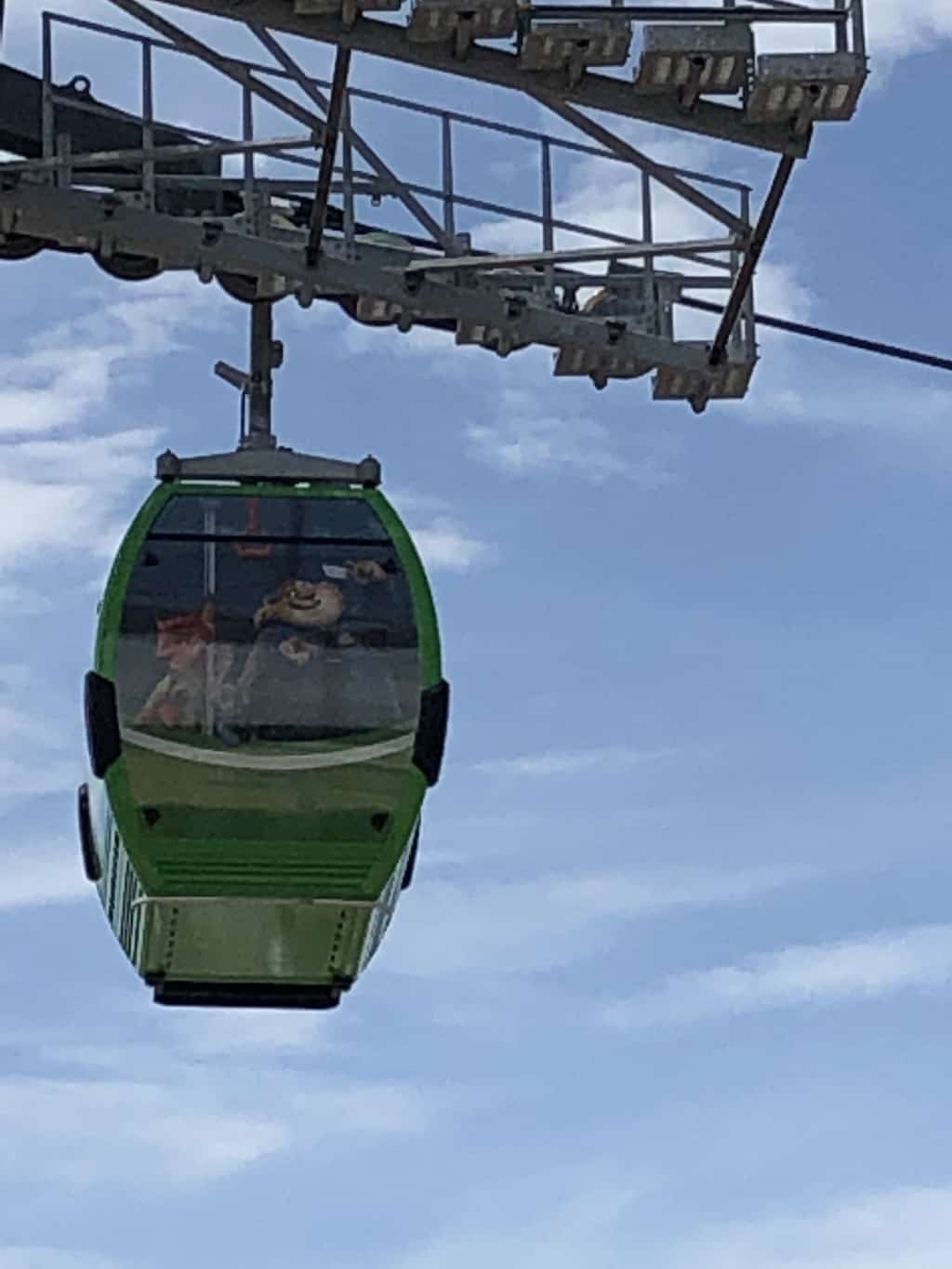 In the same fashion that the monorails connect some deluxe resorts to two of the theme parks, the Skyliner will connect two value, one moderate and one deluxe resort to two parks. Disney already offers resort guests complimentary travel via the monorails, water taxis and bus shuttles. The logical addition to land and water travel is air travel! 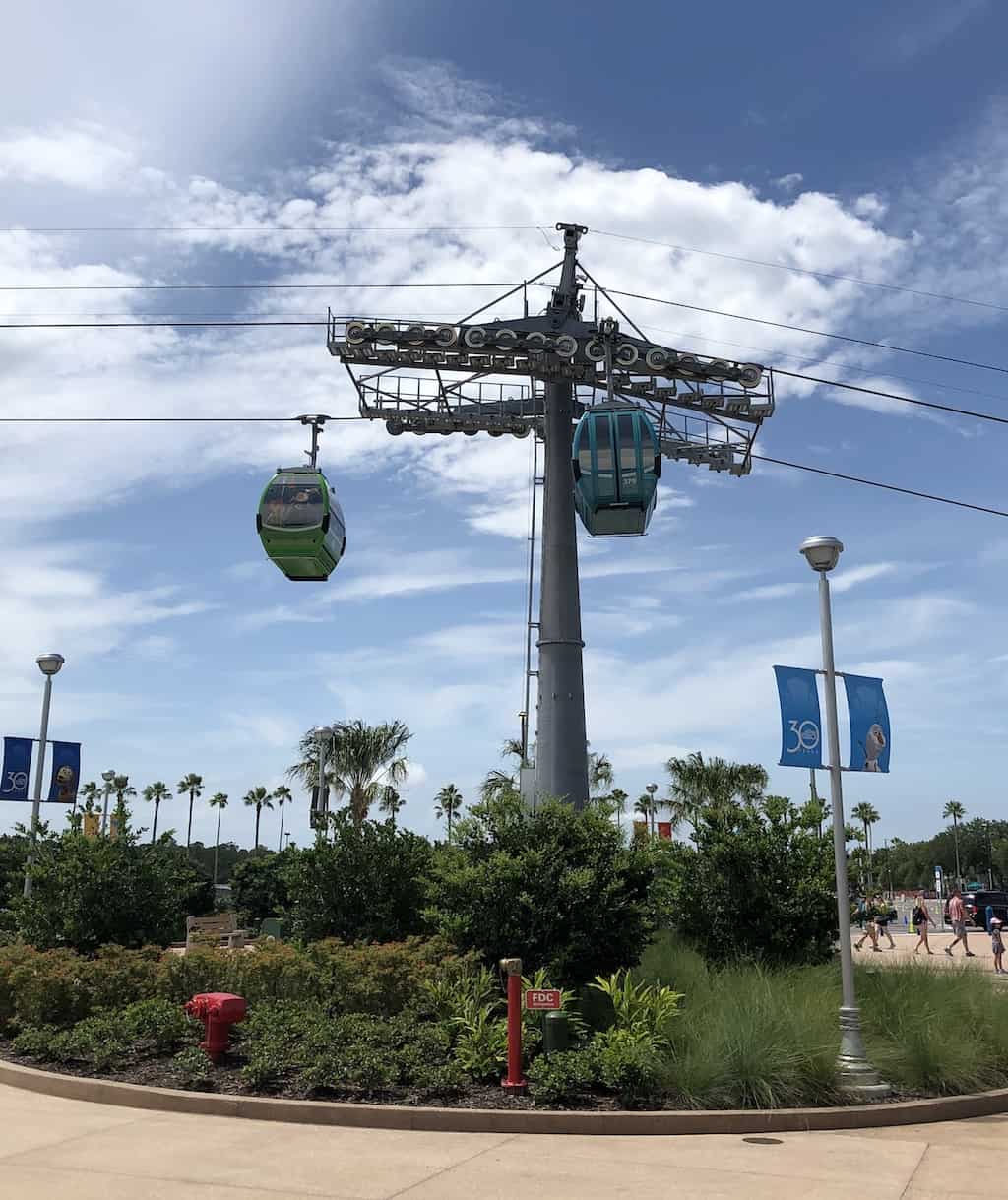 The great thing is that the gondolas will not have to fight through traffic, which will make for quicker commute times than the bus shuttles offer. We all know how long the lines can be to board the shuttles and having an additional transportation system is a great way to alleviate some of the congestion at both resorts and parks. The Skyliner doesn’t require any additional roads either, you’ll be traveling up to 60 feet above Disney World!

The gondolas are similar to ski lifts but are fully enclosed. Each gondola will be a solid color with hand painted murals of beloved Disney characters and popular park attractions, I’ve seen Mickey and his gang, as well as Buzz and Woody. The murals will be covering the windows but won’t obstruct the view to the outside. They’ll provide some much needed shade from the sun because the gondolas will not feature air conditioning. I know this sounds a little scary considering how hot it gets in Florida, but Disney has assured us that they have an air flow system installed that will give riders some relief while they enjoy the ride. From pictures, it seems that the window panels are able to tilt to allow a breeze to come in. 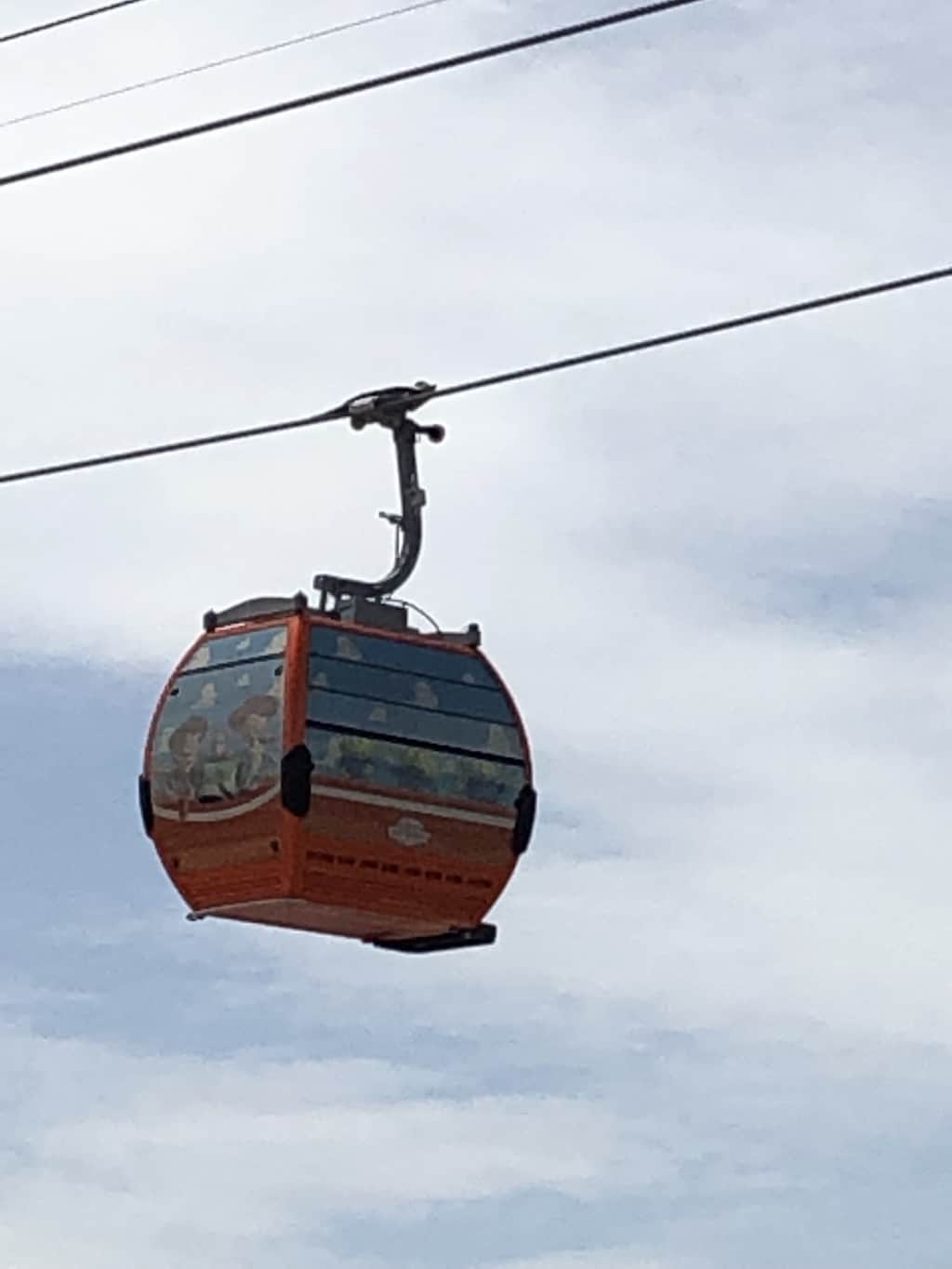 Each gondola will be able to hold 10 guests. There are two large, wooden benches along the sides and there will even be wheelchair access. Travel time will be fairly quick with estimated rides times between 5-15 minutes, depending on your destination. The gondolas will move continuously, similar to how the Seas with Nemo and Friends and The Voyage of the Little Mermaid go at a slow pace to allow guests to load and unload. Top speeds will reach 11 MPH and slow down to 1 MPH when nearing the stations. 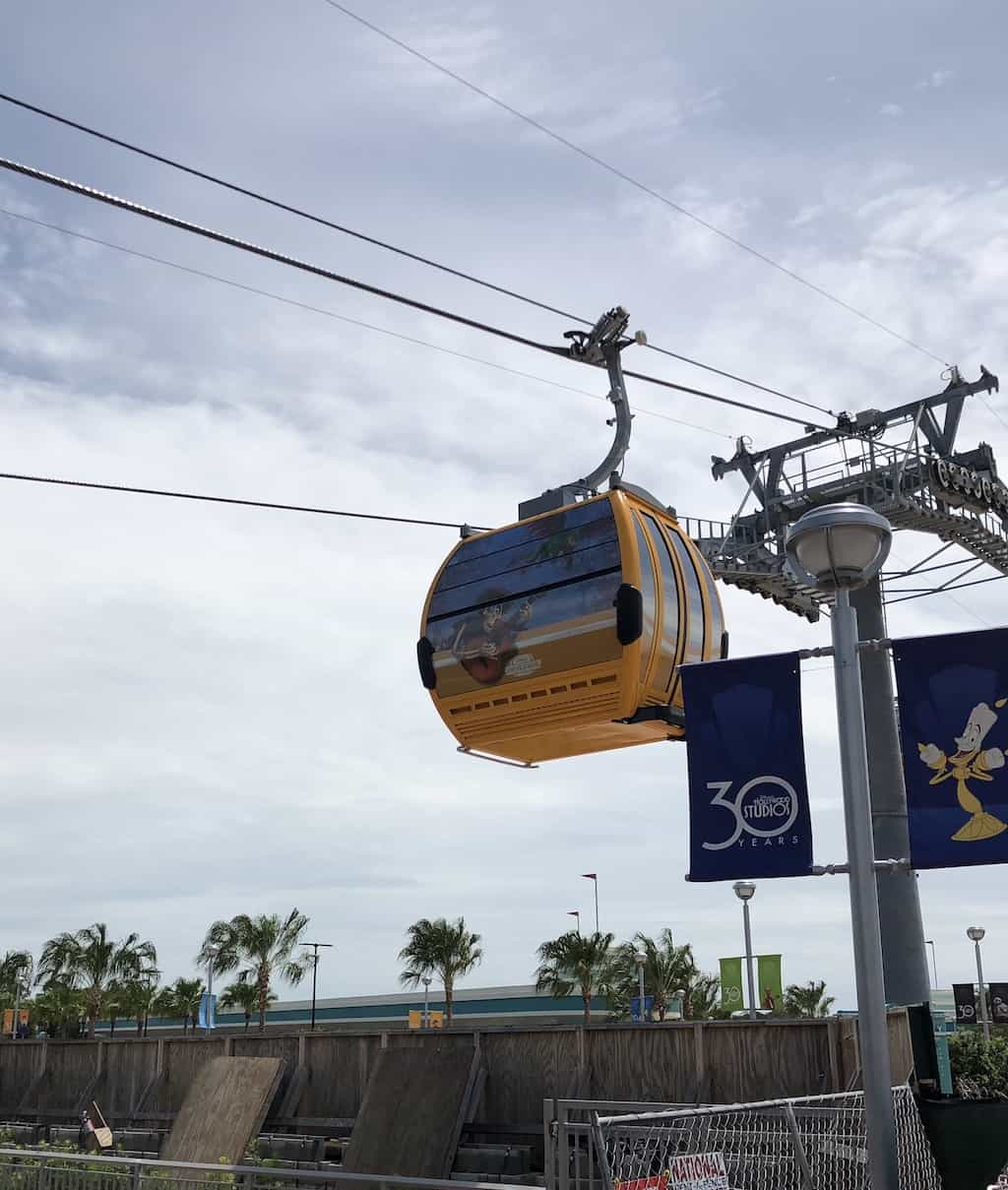 Where Will They be Located

Disney has released these facts about the Skyliner: 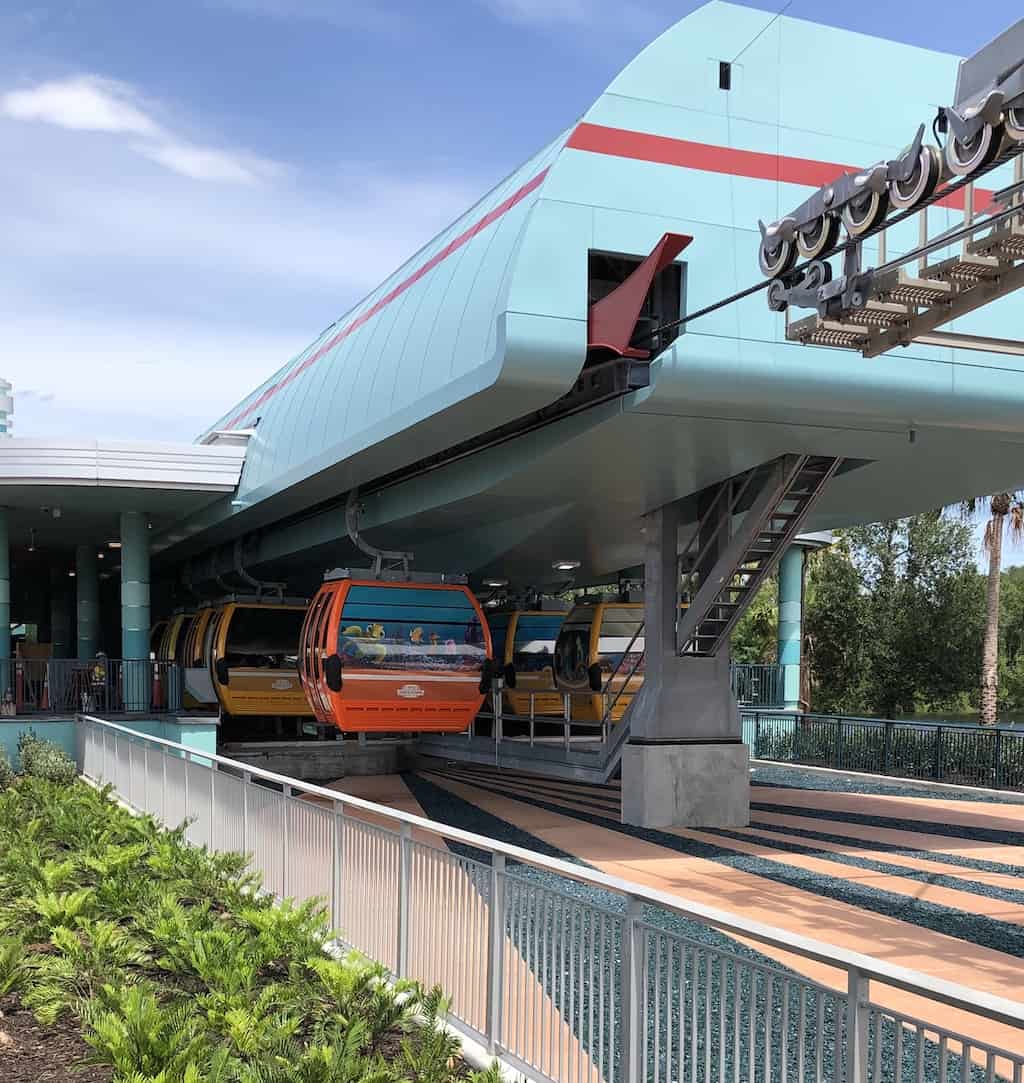 The four resorts that will be home to the Skyliner are Art of Animation, Pop Century, Caribbean Beach and the new Disney Riviera. Caribbean Beach will be the main terminal and keep the theme of the resort’s open air marketplace feel.  There will be a new table service restaurant is being added near the station as well. Art of Animation and Pop Century will share a station that is located over water. Guests will have views of Hourglass Lake as they travel. 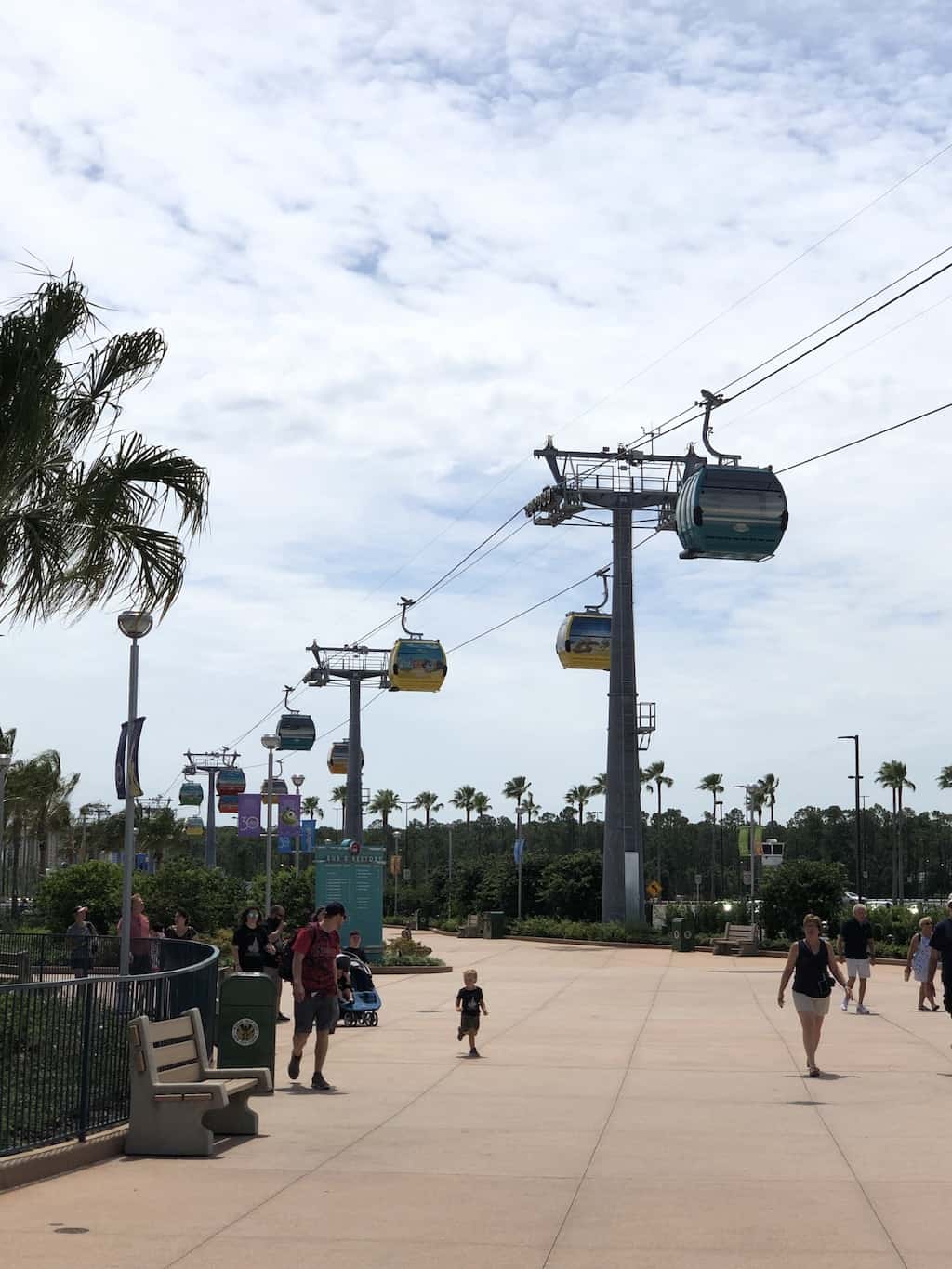 The Riviera opens later this year and will also take on guests from the north side of Caribbean Beach. Guests traveling to Epcot will arrive at the International Gateway Station which is located between France and United Kingdom. You’ll get never before seen views of the World Showcase and the lagoon. If Hollywood Studios is you destination, you’ll be in awe of the classic Tinseltown theme that awaits you. Be sure to have your camera ready for shots of the Tower of Terror on the way! The views on all three lines are said to be spectacular! 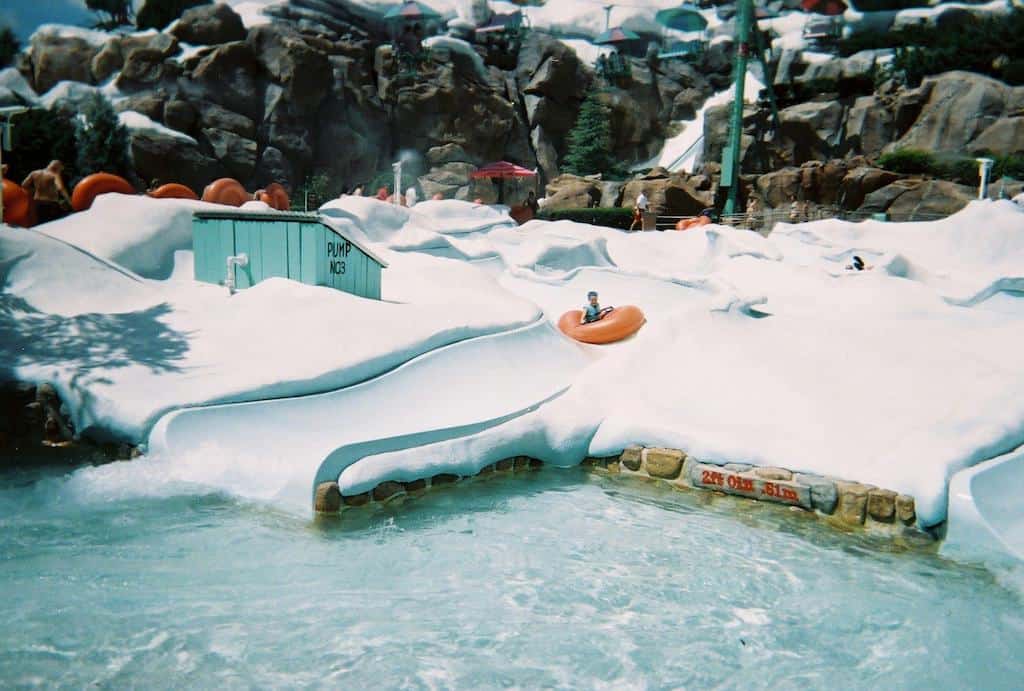 Are you excited to ride the Skyliner? What resorts or stops are at the top of your wish list for the future? Let me know what your thoughts are in the comments! 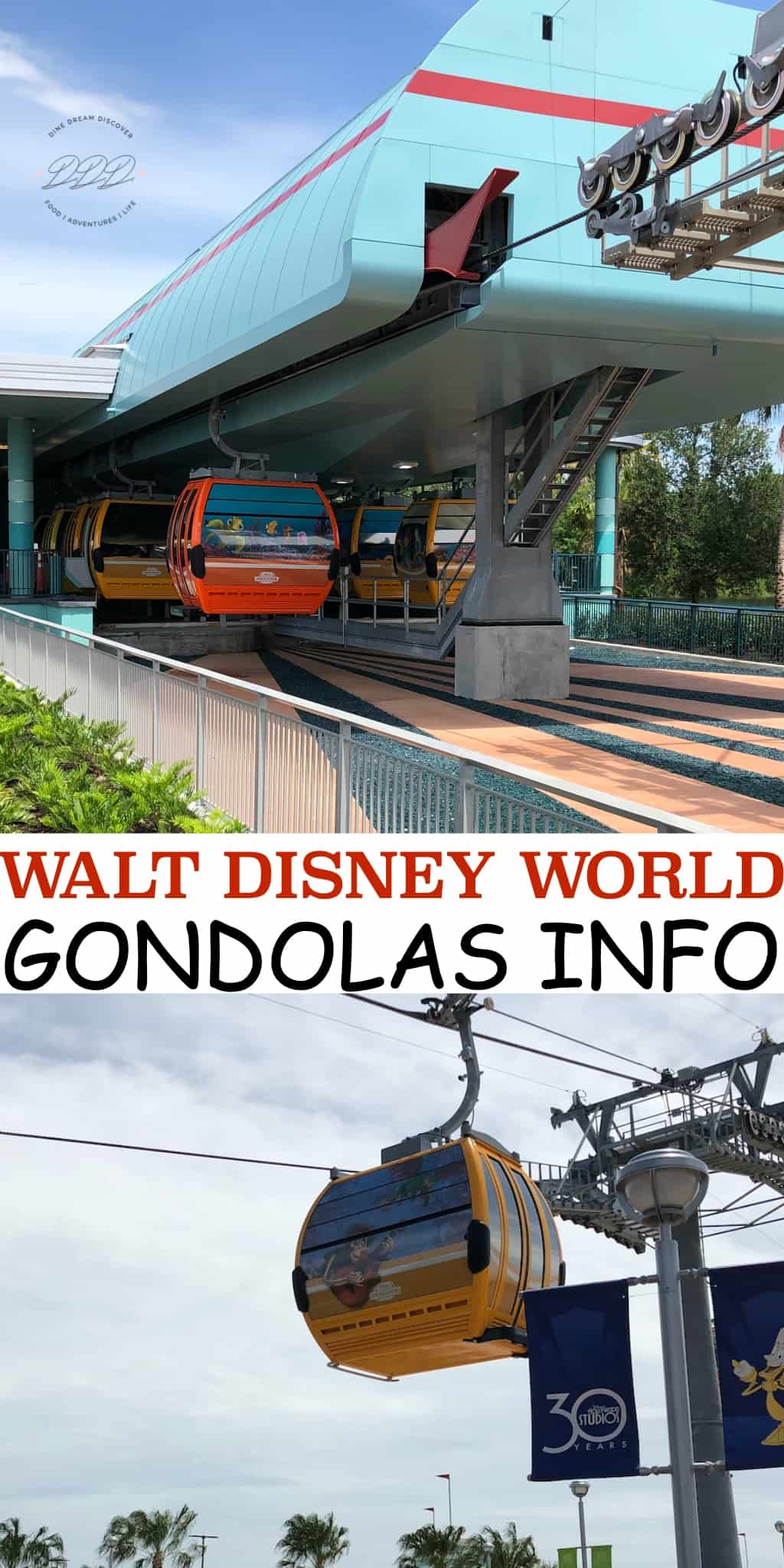 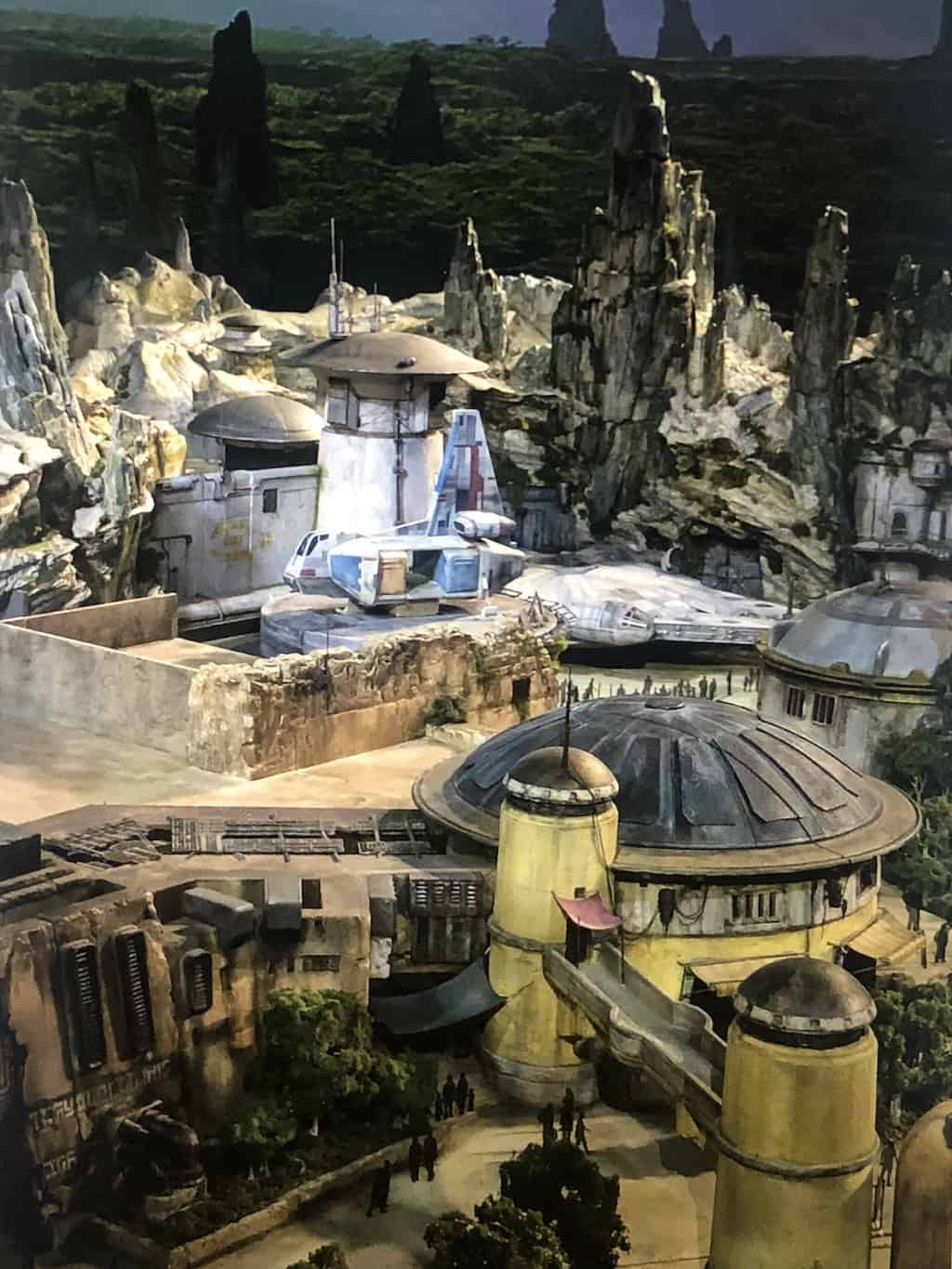 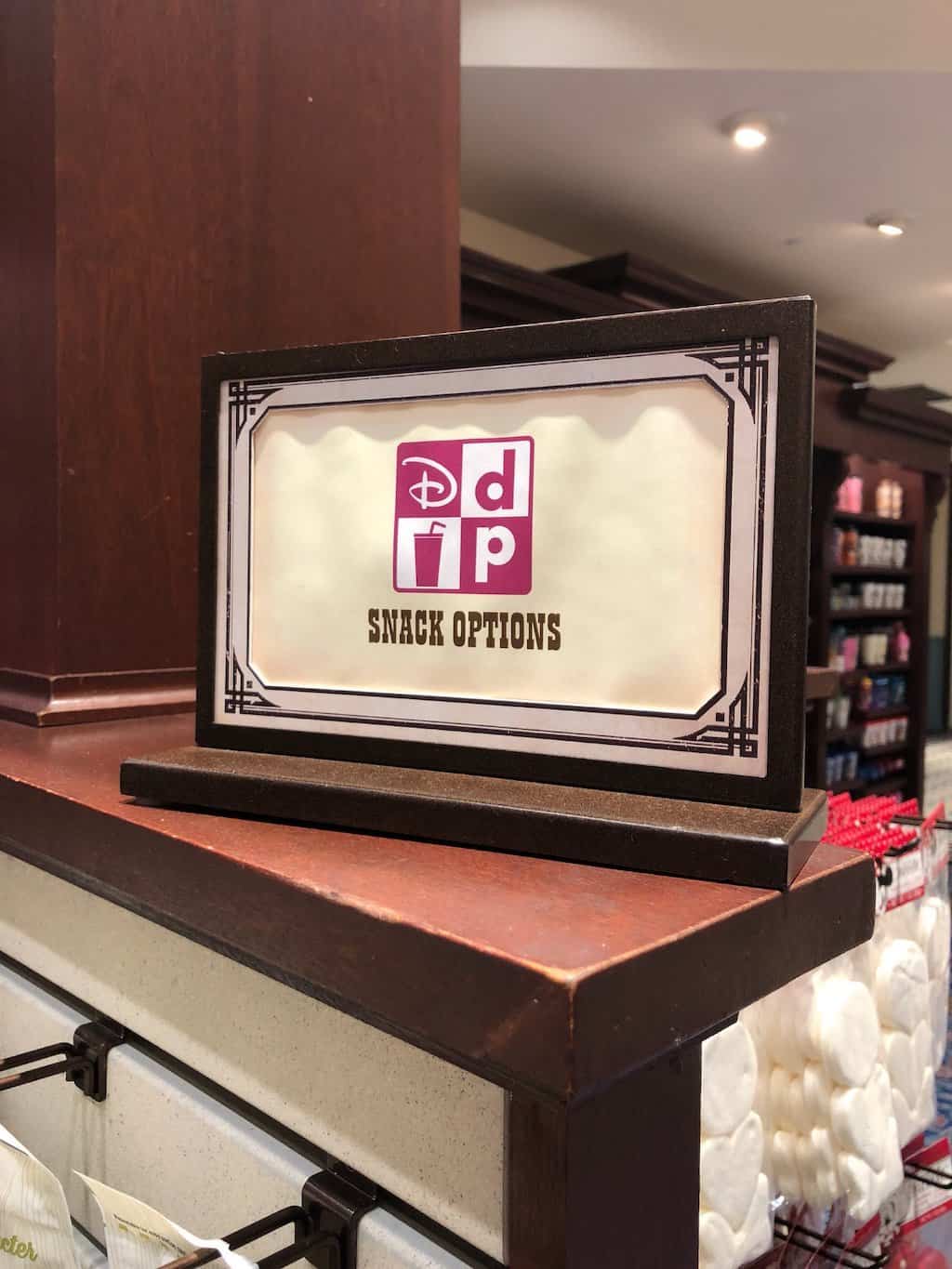 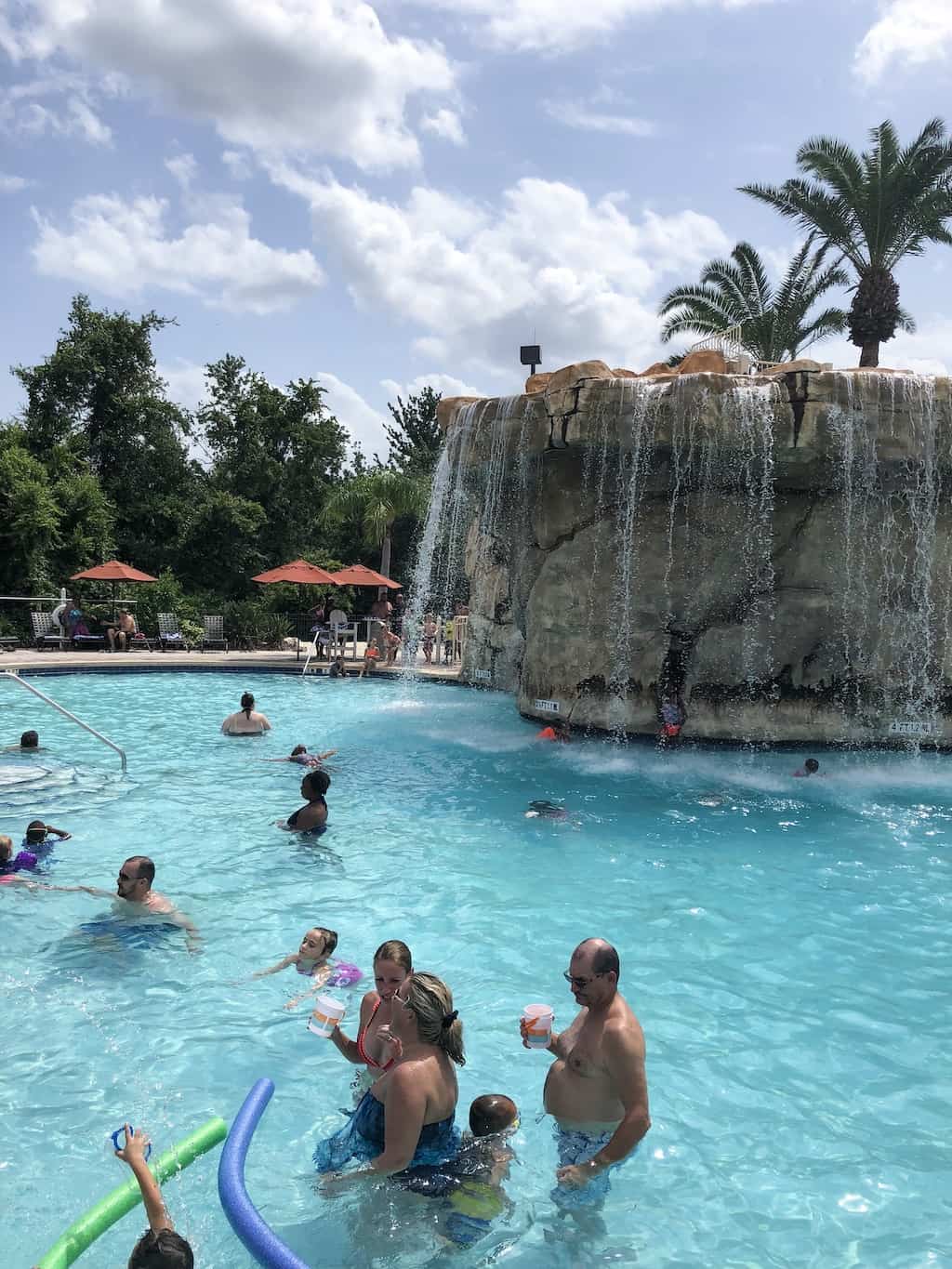